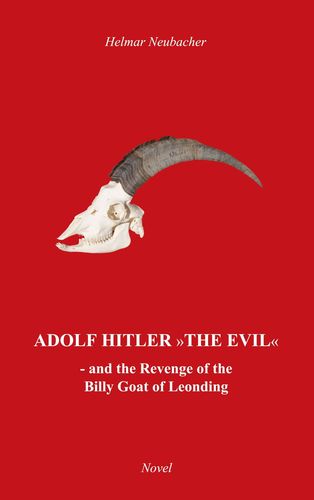 and the Revenge of the Billy Goat of Leonding

Mehr erfahren
Beschreibung
The second novel by Helmar Neubacher:
Adolf Hitler »The Evil«
- and the Revenge of the Billy Goat of Leonding
Helmar Neubacher makes to a subject of discussion the »Evil« in the former “Fuehrer” of the German people and moreover gives answers to up to this day unanswered Questions:
- What consequences on Hitler’s life did the bite of the »Billy Goat of Leonding« into the genitals of the then nine year old »Adi« have?
- What influence did Hitler’s »Youth Years in Vienna« have on his personal development towards becoming Germany’s “Fuehrer”, as mankind knows him today – especially his visit to the Jewis whore Rebecca?
- Where does Hitler’s unfathomable hatred and unrestrained will of destruction of Jews and everyone who didn’t follow his opinion come from?
- Why, how and under which circumstances did his so dearly loved niece »Geli« Raubal die?
Into the scene of action, the author integrates a highly intelligent species on a »far distant Earth«, which is observing the entire events on the Earth of the Humans with greatest of interest, without however intervening directly – and yet the millions of light years distant observers of the terrible happenings about Adolf Hitler show us
- what they look like and
- what feats they are capable of, resulting from their overwhelming technology.
As a kind of gift they also solve the age-old secret of the origin of life on our earth and tell us people where we come from.
Towards the end of the book, the author draws up a »scenario of terror«: H. Neubacher shows, how the then “Fuehrer” of the Germans nearly had managed by a hair’s breadth and without transition, in the year 1943 to provoke a 3rd World War from the 2nd World war and to cover the entire Earth with the fire of war.
This novel was written in honour of a nearly unknown soldier of the 3rd Reich. The insignificant lance corporal Eugen Wasner in 1943 told his comrades on the Eastern Front the story of »The bite of the Billy Goat of Leonding«. He, Wasner, was present at the juvenile foul deed, when his school friend »Adi« urinated into the animal’s mouth.
The Chancellor and Warlord Hitler terribly punished Wasner for his spreading of this story from childhood days. But the revenge of the abused animal kept catching up with the mighty “Fuehrer”, like a poetic justice, again and again during his entire life.
A thrilling book ,which in the form of a novel, follows the historic events between 1919 and 1945 very vividly and informatively with a large number of new points of view and up to now unknown facts, endeavoring to help shed some light on the transfigured and mystical »picture of Hitler«.