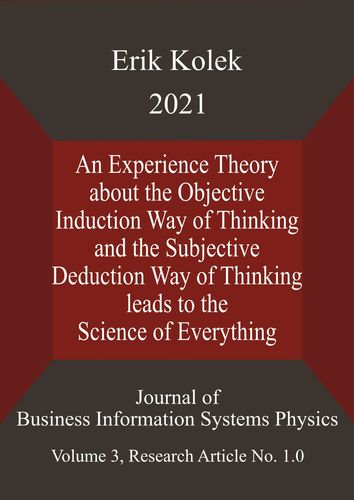 Mehr erfahren
Beschreibung
Motivated by the existing mental confinements of today's scientific system, which according to experience is based on time-honored organizational structures and classical ways of thinking, Erik Kolek, as an expert in theory building in business information systems physics, has fathomed the subjective deductive way of thinking of Albert Einstein and Stephen Hawking in order to solve an existing Copernicus problem based on it, because how else should a single subjectivity deviating from the norm be able to convince a fixed group subjectivity today? This could succeed only if this outdated science system completely gives up the inductive objective way of thinking, because in the universe simply said no objectivity is theoretically thinkable; only the subjective deduction way of thinking should allow coincident research results with our universe. The objectivity already disintegrates if generally only a circle is thought of, because isn't it also a closed curved line? For the one it is a circle and for the other person it is a closed curved line, that remains also so independently of an imagined research method which is supposed to prove objectively inductively which of the two interpretations now reflects the true experienceable world? The answer is both subjectively derived realizations are conceivable in each case as a substitution that corresponds to a both-as-also-logic, which appears generally more consistent with the universe than an either-or-logic according to Aristotle. Independent of a research method, therefore, always an interpretation of thoughts remains actually only a dreamed interpretation of individuals or groups. However, no new thoughts, also not from intersections, are generated, so false truths arise, which should be to be debunked as commonly imagined illusions, especially because often only a textual limited understanding is built up; here the visual and mathematical geometrical holistic meaning is missing. This work is therefore a theory derived on the basis of personal experience, which, starting from the objective induction way of thinking, describes the clearly evident advantages of subjective deduction, since this way of thinking leads to a unified science of everything through the fusion of all disciplines, taking into account practice.
Autor/in

Erik Kolek did research for many years in the field of business information systems and changed on December 19, 2020 to the field of theoretical physics, because he was inspired to do so by a view to the edge of our ever faster expanding universe as well as by various research articles about the relativity theory by Albert Einstein and about black holes by Stephen Hawking. That is why Erik Kolek today conducts interdisciplinary research in theoretical business information systems physics with the goal of gradually developing as many necessary physical principles and advanced technologies as possible, not only for faster-than-light space travel, to enable humanity to make interstellar journeys as well as scientific progress in fields related to space travel, such as medicine, economics, and ecology. For the realization of his private research interest Erik Kolek uses his logical thinking, mathematical skills and pictorial imagination.