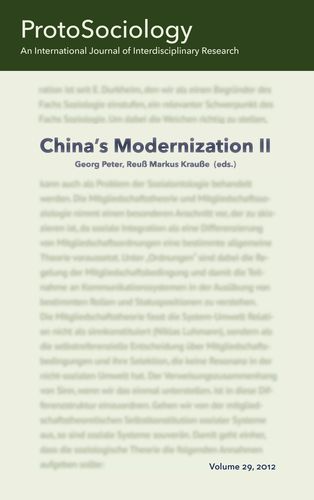 Mehr erfahren
Beschreibung
The idea of only one way leading to a modern society seems to be hardly tenable. But even if we agree to this, our theories and terms describing modernization are gained on our own Western history. So social science has to reconsider its basic terms to describe China’s modernization, and maybe even the understanding of modernization itself.
The second of two volumes on China’s modernization collects articles by leading Chinese and Western scientists focusing on the main conflicts and differences this process involves.

In the first section – “On Contemporary Theory of Modernization” – Manussos Marangudakis represents Shmuel N. Eisenstadt’s concept of “Multiple Modernities and the Theory of Indeterminacy”, one of the best elaborated perspectives on modernity.

“Changing China: Dealing with Diversity”, the second section, examines how China copes with dissent and discusses the significance of law and a civil society. Merle Goldman begins with “Dissent of China’s Public Intellectuals in the Post-Mao Era”. The “Modernization of Law in China – its Meaning, Achievements, Obstacles and Prospect” is the subject of Qingbo Zhang. Scott Wilson presents a Gramscian analysis of civil society in “China’s State in the Trenches”. And Francis Schortgen and Shalendra Sharma study how China is “Manufacturing Dissent: Domestic and International Ramifications of China’s Summer of Labor Unrest”.

“Neoliberalism and the Changes in East Asian Welfare and Education” is the focus of the third section. Beatriz Carrillo Garcia investigates the “Business Opportunities and Philanthropic Initiatives” in China. “Time, Politics and Homelessness in Contemporary Japan” is the subject of Ritu Vij. Different school books show the “Educational Modernisation Across the Taiwan Straits” by David C. Schak. And Ho-fung Hung discusses the role of China in globalization following the question: “Is China Saving Global Capitalism from the Global Cri-sis?”

The additional rubric “On Contemporary Philosophy” involves three articles about “International Development, Paradox and Phronesis” by Robert Kowalski, “The World in the Head” by Robert Cummins, and “Communication, Cooperation and Conflict” by Steffen Borge.