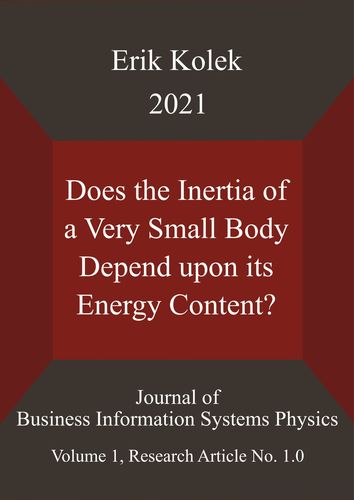 Does the Inertia of a Very Small Body Depend upon its Energy Content?

Mehr erfahren
Beschreibung
Motivated by the special and general relativity theory of Albert Einstein in this research article of Erik Kolek a connection between astrophysics and quantum physics is assumed, which leads as a consequence to the quantum theory of gravity. This completely new gravity theory should be applicable to very large bodies, but also to very small bodies, because their energy content should have an influence on the inertia of such bodies, for example on black holes and stars as well as on particles and photons. A distinction is also made here between the brightness and darkness of particles and photons. Such a distinction is necessary to design a model-based representation of a supersymmetric, relativistic universe, such as is likely to exist in astrophysics and quantum physics. This model visualization is based on a developed supersymmetric relativistic modeling and visualization approach. This approach was developed by an expert who has research experience in the field of business information systems, therefore this researcher is free of bias and absolutely neutral to information and findings obtained regarding theoretical physics. Using this method, it is generally possible to conduct research beyond the standard model of physics. With the theory development the following main results are achieved: a thermodynamically based further development of Newton's gravity theory, the discovery of two general laws of nature, called quantum gravity laws I and II, and as a further consequence of both laws, the explanation of gravity in the quantum matter spectrum. Finally, it is discussed why the special and general relativity theory of Albert Einstein is not limited to the speed of light, because this is justified by the physical fact that this is also suitable for the explanation of the light heat, therefore, as a further consequence, an advanced molecular-kinetic theory of the light heat is represented. This completed light heat theory is therefore equal to a completely new thermodynamics of physics.
Autor/in

Erik Kolek did research for many years in the field of business information systems and changed on December 19, 2020 to the field of theoretical physics, because he was inspired to do so by a view to the edge of our ever faster expanding universe as well as by various research articles about the relativity theory by Albert Einstein and about black holes by Stephen Hawking. That is why Erik Kolek today conducts interdisciplinary research in theoretical business information systems physics with the goal of gradually developing as many necessary physical principles and advanced technologies as possible, not only for faster-than-light space travel, to enable humanity to make interstellar journeys as well as scientific progress in fields related to space travel, such as medicine, economics, and ecology. For the realization of his private research interest Erik Kolek uses his logical thinking, mathematical skills and pictorial imagination.