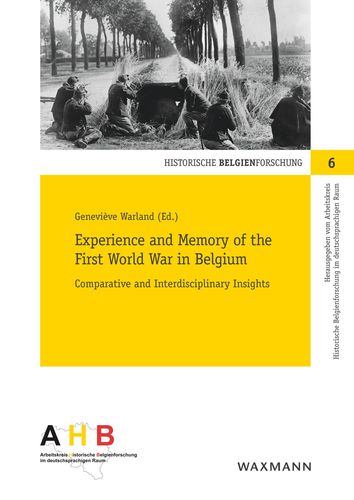 Experience and Memory of the First World War in Belgium

Mehr erfahren
Beschreibung
Due to its unprecedented violence and unexpected duration, the First World War generated many complex and tragic experiences, which over time have been reinterpreted. Connecting past experiences with current memories of the war - in order to revisit in an interdisciplinary way Belgium's archival and literary, as well as material and monumental war heritage - is the goal of this book which presents the outcomes of the research project Experiences and Memories of the Great War in Belgium (MEMEX WW1).
The following topics as part of the historical, psychological and memory studies are addressed: emotions and writing strategies in a war context and attitudes towards the Germans based on the diaries of Belgian soldiers and scholars; the memory of the war in the two fort cities of Antwerp and Liege during the Interbellum; the literary reception of Tom Lanoye's No Man's Land and the impact of the reading of some poems to current Flemish students. Another issue concerning the social representations of the war investigates the representations of soldiers as heroes or as victims among young Europeans. As for the impact of war centenary commemoration events, they are analyzed firstly through the iconology of the First World War illustrated on stamps and secondly through the effects of exhibitions and documentaries on young Belgians.
Autor/in

Geneviève Warland is Reader in History at UCLouvain and Research Assistant in the project Recognition and resentment: experiences and memories of the Great War in Belgium. Her PhD (2011) dealt with the public role of history and the conceptions of nation and Europe as interpreted by the contemporary philosophers J.-M. Ferry and J. Rüsen, on the one side, and by the historians P. J. Blok, Karl Lamprecht, Ernest Lavisse and Henri Pirenne on the other. She has worked as guest lecturer at the University of Frankfurt/Main and at the University of Paderborn. Her research interests focus on the history of historiography in Europe in the 19th and 20th centuries, especially on the role of historians as scientific mediators and on the expression of emotions in their writings.