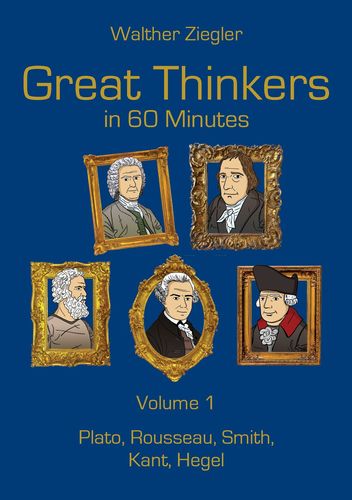 Mehr erfahren
Beschreibung
"Great Thinkers in 60 Minutes Volume 1" comprises the five books, already published as separate volumes, "Plato in 60 Minutes", "Rousseau in 60 Minutes", "Smith in 60 Minutes", "Kant in 60 Minutes", and "Hegel in 60 Minutes". Each short study sums up the key idea at the heart of each respective thinker and asks the question: "Of what use is this key idea to us today?" But above all the philosophers get to speak for themselves. Their most important statements are prominently presented, as direct quotations, in speech balloons with appropriate graphics, with exact indication of the source of each quote in the author's works. This light-hearted but nonetheless scholarly precise rendering of the ideas of each thinker makes it easy for the reader to acquaint him- or herself with the great questions of our lives. Because every philosopher who has achieved global fame has posed the "question of meaning": what is it that holds, at the most essential level, the world together? There have emerged here a range of very different answers. In Plato, for example, the "Idea of the Good" is that to which we need to open our souls; in Rousseau, it is rather only in our own original nature that we need to trust; in Adam Smith, it is in self-interest, which spurs on each individual and is finally transformed, by an "invisible hand", into the common good; in Kant it is the application of Reason which frees us and makes us capable of extraordinary moral actions; and in Hegel, finally, everything is held together by the dialectical self-development of the World-Spirit, which drives onward from epoch to epoch through the deeds of individuals and of nations until it has finally reached its great goal. In other words, the meaning of the world and thus of our own lives remains, among philosophers, a topic of great controversy. One thing, though, is sure: each of these five thinkers struck, from his own perspective, one brilliant spark out of that complex crystal that is the truth.
Autor/in