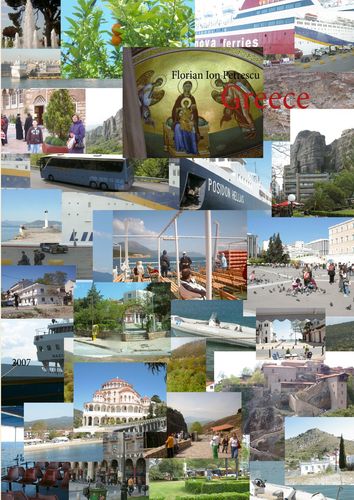 Mehr erfahren
Beschreibung
Greece, officially the Hellenic Republic, and historically Hellas or the Republic of Greece in English, is a country in Europe. Although geographically located at the continent's southeast, it is generally included in Western Europe.

Greece has land borders with Albania, the Republic of Macedonia and Bulgaria to the north, and Turkey to the east. The Aegean Sea lies to the east of mainland Greece, the Ionian Sea to the west, and the Mediterranean Sea to the south. Greece has the twelfth longest coastline in the world at 13,676 km (8,498 mi) in length, featuring a vast number of islands (approximately 1,400, of which 227 are inhabited), including Crete, the Dodecanese, the Cyclades, and the Ionian Islands among others. Eighty percent of Greece consists of mountains, of which Mount Olympus is the highest at 2,917 m (9,570 ft).

Modern Greece traces its roots to the civilization of ancient Greece, generally considered the cradle of Western civilization. As such, it is the birthplace of democracy, Western philosophy, the Olympic Games, Western literature and historiography, political science, major scientific and mathematical principles, Geography, Biology, university education, coinage, and Western drama, including both tragedy and comedy. This legacy is partly reflected in the seventeen UNESCO World Heritage Sites located in Greece, ranking Greece 7th in Europe and 13th in the world. The modern Greek state was established in 1830, following the Greek War of Independence.

A developed country with an advanced, high-income economy and very high standards of living, Greece has been a member of what is now the European Union since 1981 and the eurozone since 2001, NATO since 1952, and the European Space Agency since 2005. It is also a founding member of the United Nations, the Organization for Economic Co-operation and Development, and the Organization of the Black Sea Economic Cooperation. Greece is the largest economy of the Balkans.

Athens is the capital and the largest city in the country (its urban area also including Piraeus).
Autor/in