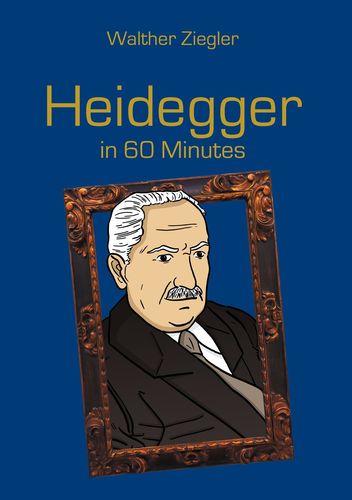 Mehr erfahren
Beschreibung
Heidegger is without a doubt one of the most important thinkers in the history of the Western world. He called his philosophy a “fundamental ontology”. His interest as a philosopher extended beyond the individual sciences to the underlying question of the meaning of life as a whole. His key question, then, was: “What is the meaning of Being?” But if we are to ask about the meaning of Being, and thus about the meaning of life, we must – so Heidegger argues – first look into the question of just what kind of being it is that poses such questions. This question-posing being, he says, is Man himself. Man is constantly looking for orientation. This is why Heidegger also describes human life as a great challenge. Life does not live itself but rather requires constant decisions in order to be lived. But this also means that we can, potentially, fail to realize the meaning of our own life. Heidegger provocatively suggests that most people fail to live out their existence. Instead of living authentic lives of our own, we stay within the tracks made safe and worn by others. But how do I know what life would be authentically mine? How do I make out the life that I am “destined” for? The book “Heidegger in 60 Minutes” uses key passages quoted from Heidegger’s own works to explain the philosopher’s famous “existential analysis” in a comprehensible way. It takes the reader on an adventurous journey to the deepest structures of his or her own existence. There will surely be few readers of the chapters on the “’care’ character of human existence” or “anxiety in the face of nothingness” who will not recognize something of their own life-experience in the existential structures laid bare by Heidegger. In the chapter on “what use Heidegger’s discovery is to us today” it is then shown how broadly and topically relevant Heidegger’s thoughts still are for our personal lives and for the society of the 21st Century. The book forms part of the popular series “Great Thinkers in 60 Minutes”.
Autor/in