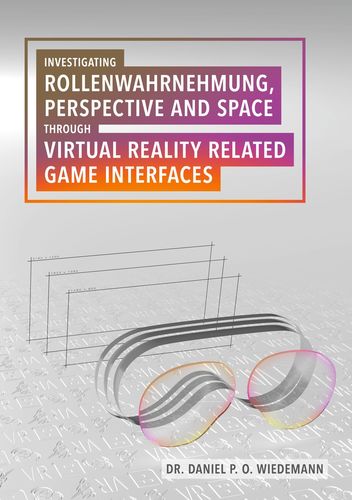 Mehr erfahren
Beschreibung
This book is the publication of my PhD dissertation and is written in the corresponding style. The included research provides explorations and investigative reflections on Rollenwahrnehmung (a newly coined phrase meaning role perception/fulfillment), Perspective and Space through Virtual Reality (VR) game interfaces.
A number of important topics will be addressed, like the creation of new experiences in the context of VR, the extension and new development of various interaction paradigms, various User Experience (UX) aspects and user guidance in a sophisticated new medium.
Placed in the field of design practice, this research focuses on the creation of digital gaming artifacts, while extrapolating insights and guidelines concerning VR interfaces. Hence, this practice-based research is derived from a portfolio of specifically developed interactive artifacts, following the methodological approach of Constructive Design Research. These include the VR related games Nicely Dicely, LizzE - And the Light of Dreams and Gooze. They were used for various Lab experiments and Showroom presentations, while continually being refined throughout an iterative process.
Nicely Dicely is an abstract game based on physics. In Local Multiplayer, up to four players are able to compete or collaborate. It is not a VR game per se, but features both, Monoscopic and 3D Stereoscopic Vision modes, which were tested in an experiment on their effect on Player Immersion.
LizzE - And the Light of Dreams is a Singleplayer 3rd Person Hack and Slay game based in a fantasy universe. In an experiment, the game was used to primarily investigate in which ways 3rd Person VR games can work for a broad audience, regarding camera behavior.
Gooze is a 1st Person VR puzzle game, taking place in a realistic horror environment with supernatural aspects. It was designed with diverse VR interaction technologies in mind and offers users different options to play the game, depending on available hardware and preferences. The Locomotion and Virtual Object Interaction mechanics were tested in an experiment regarding their UX.
In summary, this book illustrates various game, interface and VR designs, informing the emerging field of VR game development of the relationship between UX, interfaces and gameplay. Furthermore, guidelines for designing and developing specific aspects of VR games were identified and each single artifact can be used as a design and development precedent for practice and academia.
Autor/in

Daniel P. O. Wiedemann was born in Munich, Germany. He obtained his PhD degree at Middlesex University London. His latest interests lie in the design of extended realities and digital games. Before his PhD research, he obtained a diploma in communication design and art direction at the Akademie an der Einsteinstraße U5, Munich. After that he worked for over three years as an art director experience design in an advertisement agency in Hamburg, for clients like Mc Donald's, Casio, Granini, Montblanc and Johnson & Johnson. Following this, he studied Creative Technology at Middlesex University London and obtained an MSc degree. During this time, he also founded FIERY THINGS, a small indie game studio.
www.daniel-wiedemann.de/research | www.fierythings.com