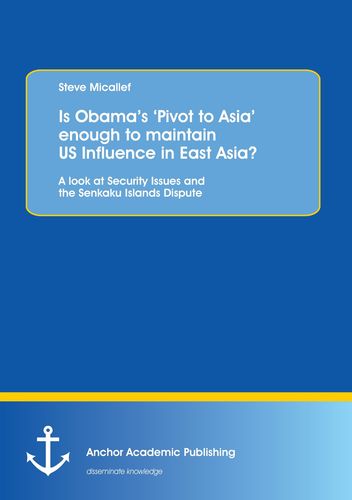 Is Obama’s ‘Pivot to Asia’ enough to maintain US Influence in East Asia?

A look at Security Issues and the Senkaku Islands Dispute

Mehr erfahren
Beschreibung
The 20th century has been defined as the American Century, however, the history of the 21st century will be written in Asia.
Today, East Asia is home to a third of the world’s population and includes some of the world’s largest economies. Hence the US has placed more emphasis on the region, to strengthen its economic ties and to show its long term allies that it has not forgotten about them. Disengagement from the Middle East and the rise of China has meant that the US has again turned its focus to the Asia-Pacific and East Asia, a region rife with old, long seated distrust and territorial disputes.
The dissertation will focus on how the US is executing its ‘Pivot to Asia’ focusing on the many security issues which it must deal with, both those involving its allies and those involving its strategic rivals. All while trying to maintain its influence over East Asia in the face of a rising China.
Whilst the US is welcomed by some and unwelcomed by others, the dissertation will try and determine whether the US’s renewed interest will contribute to the prosperity of East Asia or whether the US will again be bogged down in a region where it is not welcomed.
Autor/in