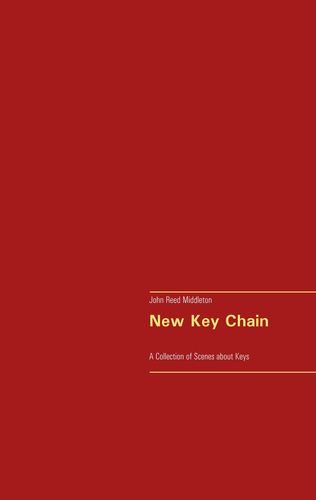 A Collection of Scenes about Keys

Mehr erfahren
Beschreibung
New Key Chain is a play for students in Years 6, 7 or 8 (Level 3/1). It is designed for a normal-sized English class and for students with varying interests in acting. Since there are 49 roles - none of which are really minor - students who enjoy acting can perform in several scenes and play to their heart's content, whereas students who aren't particularly keen on acting only have one role to master in one single scene.
Every scene deals with a key, big keys and small keys, new keys and old keys, keys that lock doors and keys that open hearts, keys that are lost and keys that are found, keys that bring people together and keys that bring people apart, as we learn from the two MCs.
There are monologues, dialogues and scenes with as many as eight or nine performers.
The themes are geared to the experiences of students today - such as friendship, bullying, infatuation and rejection - and offer young actresses and actors the opportunity to discover a wide variety of feelings while performing.
The plots are believable and understandable, the language is idiomatic and easily accessible for English learners.
New Key Chain works well when performed for smaller audiences: parents and other classes. But it can also be highly entertaining for a large audience. Performing time: about one hour.
Of course, it is also possible to select individual scenes and perform them as simple skits outside the context of the New Key Chain. In that case it is still recommendable to create a suitable setting for presenting the skits to an audience.
The true joy of performing a foreign-language play is to feel it click, to realize that the people watching the performance don't only get the picture, they are also delighted to see a story come to life when presented in English by non-native performers.
By purchasing the play, you automatically obtain the stage rights.
Autor/in

John Middleton was born in Cedar Rapids, Iowa (USA).
He was a teacher for 43 years at a German school in Hamburg where he taught English, Drama and Art.
He has also spent over 35 years subtitling films and translating screenplays (www.middleton-group-translations.com).
During the past 30 years he has performed his own five one-act plays "David, the Death of a Clown", "Carnival at Castle Rock", "Killing Daddy", "Little Goethe" and "Das Kleid") at small theaters in and around Hamburg.

THE PLAYLET SERIES is his latest writing project, topical collections of scenes in English for English learners from Year 1 to Year 12 (Level 1 to Level 6) who want to perform (english-playlets.com).