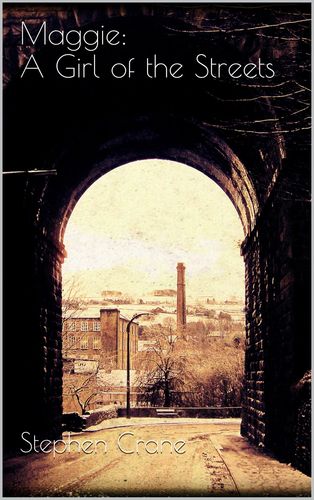 Maggie: A Girl of the Streets

Mehr erfahren
Beschreibung
A very little boy stood upon a heap of gravel for the honor of Rum Alley. He was throwing stones at howling urchins from Devil's Row who were circling madly about the heap and pelting at him.

His infantile countenance was livid with fury. His small body was writhing in the delivery of great, crimson oaths.

Howls of renewed wrath went up from Devil's Row throats. Tattered gamins on the right made a furious assault on the gravel heap. On their small, convulsed faces there shone the grins of true assassins. As they charged, they threw stones and cursed in shrill chorus.

The little champion of Rum Alley stumbled precipitately down the other side. His coat had been torn to shreds in a scuffle, and his hat was gone. He had bruises on twenty parts of his body, and blood was dripping from a cut in his head. His wan features wore a look of a tiny, insane demon.

On the ground, children from Devil's Row closed in on their antagonist. He crooked his left arm defensively about his head and fought with cursing fury. The little boys ran to and fro, dodging, hurling stones and swearing in barbaric trebles.
Autor/in