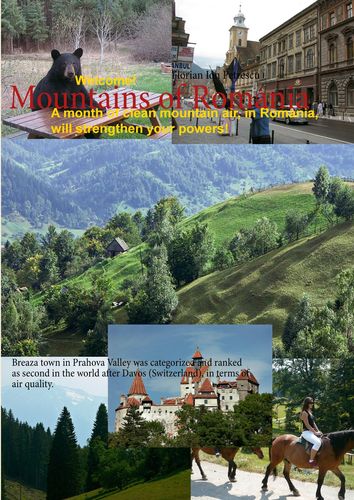 Mehr erfahren
Beschreibung
Breaza town in Prahova Valley was categorized and ranked as second in the world after Davos (Switzerland), in terms of air quality.
With a mild climate, similar, but with an air slightly more powerful, are classified and resorts, Predeal, Poiana Brasov, Tusnad, Borsec, Campina, Busteni, Azuga, Sinaia, etc..

The Carpathian Mountains are the eastern wing of the great Central Mountain System of Europe, curving 1500 km (~900 miles) along the borders of Austria, the Czech Republic, Slovakia, Poland, Ukraine, Romania, Serbia and Montenegro and northern Hungary. Romania contains by far the largest area of the Carpathians, and forms the eastern and southern boundaries of the region. 55.2% of the Carpathian region is located within Romania. 47.4% of Romanian territory is part of the Carpathian mountain range. The Romanian Carpathians are divided into three groups: Eastern Carpathians, Southern Carpathians and Western Carpathians. The highest peaks are in the Southern Carpathians - Moldoveanu (2544 m/8,346 feet) and Negoiu (2535 m/8,316 feet) The Carpathians' ensemble is characterized by its varied landscape owing to the different types of relief particularities (glacial, karstic, riverine, structural-lithological), the alternation of mountainous and depressions units, gorges and valleys and the diversity and configuration of the vegetation. They contain the highest concentration of large carnivores in Europe, with estimates of over 6000 brown bears, 2500 wolves and some 1750 lynx living in the region. The Romanian Carpathians represent an exceptional tourist attraction.

The flora of the Carpathians includes 1350 species, among which 116 are endemic. The Carpathian floral year begins at the end of February - the beginning of March, with the colsfoot, the snowdrop, the hollow wort and the pheasant's eye. The rose bay flowers at the beginning of June, when the mountain slopes above the juniper belt become red being covered by the splendid carpet of rose bay. It is indeed a special event. In July and August, the lawns, the slides and the rock walls are turned into multicolored canvases by the other plants in bloom: little lilies of the valley, pigeon chins, various species of pursuance, bird's eye, saxifrages, spotted gentian and the yellow gentian. Autumn time is announced by the amellus starwort (Aster amellus) and the swallow wort gentian.
Autor/in