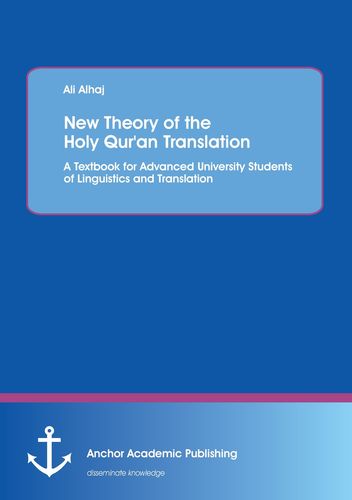 New Theory of the Holy Qur'an Translation. A Textbook for Advanced University Students of Linguistics and Translation

Mehr erfahren
Beschreibung
Translation is as old as the art of writing or as old as history of education in general. It is occasioned by the social needs of people. Whenever, for instance, two linguistic groups interact as neighbors to each other, translation from and to each other’s languages becomes inevitable if they must meaningfully communicate with each other in matters of commerce, intermarriage, education, legal issues, etc. Religious books like those that the Holy Qur’ān and the Bible have been facilitating essentially translated to numerous languages in different parts of the world. Translation is also regarded as a significant key that connects the literary works of authors from diverse culture. It also plays a pivotal role in minimizing the cultural divergences. Translation has been widely practiced over the centuries in the world in general and in Arab world in particular. The founding mythology and the sacred texts of the dominant religions are all based on translations. In short, translation has been essential for development and change in literature, commerce, technology, politics, so on and so forth.
Autor/in

Ali Albashir Mohammed Al-Haj was born in Sudan/ Berber 12th of June 1966. Graduated from Yemen University (1995)(Sanaa,) and University of Khartoum(2000) and obtained Bachelor of Arts(English) Postgraduate diploma(English),.M.A in English from University of Khartoum(2000) English literature. And PhD in English literature (2003). PhD in translation, Omdurman Islamic University 2014) Ali is pursuing his 3rd phd in pure linguistics. Now Ali is working as associate professor at Jazan University/ Kingdom of Saudi Arabia. Ali has published 25 books and 20 Articles in national and international journals. Ali has translated 8 books,( The Art of Leadership by Dr. Gassem Alharabi , The Recruitment in Saudi Civil Service by Dr. Hamed Alshamery Jazan University At A Glance and The Light Track and Love( Arabic Metric Poetry) by Rahuf Almaubark). He published 36 books),. Ali is a member of Editing Board of Marco Institute Journals, International Journal of Applied Linguistics and English Literature ISSN 2200-3592 (Print) , ISSN 2200-3452 (Online),scholrlink journals and he is also a supervisor of 4 PhD theses in English language.