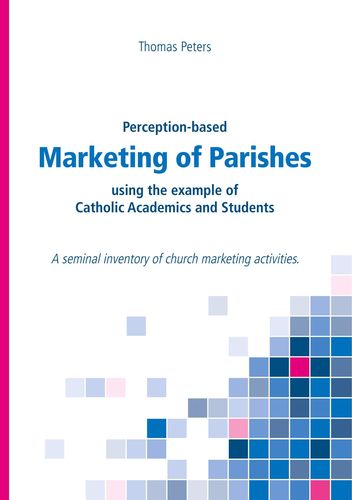 Mehr erfahren
Beschreibung
The Roman Catholic Church in Germany is faced with an increasingly pluralistic and secularized society that further precipitates the decline in membership that has been ongoing already since the 1970s through instances of aging population and church leavings, and has been causing at the level of locally and regionally operating parishes and their establishments a growing shortage of personnel and other resources.

Here a marketing communication that is based on target group-specific perception can be useful to remedy the situation in that the religious and social offers as well as the personal and media appearance of parishes are adjusted to population groups that credit to their socioeconomic potentials are able to substantially contribute to building social capital in church contexts.

Particularly Catholic Academics with high affinity to the Church make their comprehensive individual, professional and financial resources available more frequently and more consistently for voluntary engagements than the majority of the German population.
A group that positively engages to great extent is that of those students and Academics who are organized in Catholic student fraternities or associations and their local institutions. A targeted involvement of this small but high-resourced population group in local church activities can be a substantial and existential aid for the Catholic Church in Germany and sustain its further development. This is explored and discussed on the example of the largest academic association in Europe (Cartel Confederation of the Catholic German Student Associations (CV), in German: Cartellverband der katholischen deutschen Studentenverbindungen), and attached specific practical recommendations for parish marketing.

The Germany-based research results can be applied to other European countries such as Austria and Switzerland. Furthermore the discussion of results offer a broad range of new perspectives and ideas for church marketing in those countries, which have a living culture of denominational student associations.
Autor/in

Thomas Peters has more than 25 years of experience as independent marketing and media consultant with interim assignments as managing director and business development manager in new media start-ups, agencies and media groups.
Since 2007, the multilingual hobby jazz pianist and water sports enthusiast works as marketing advisor and managing director of the management consultancy comm:act and is a member of the board of the CV-Academy, the educational institution of the largest European association of academics (CV).
The graduated communication and media expert received his doctorate in 2018 on "Marketing of Parishes, Church Marketing".