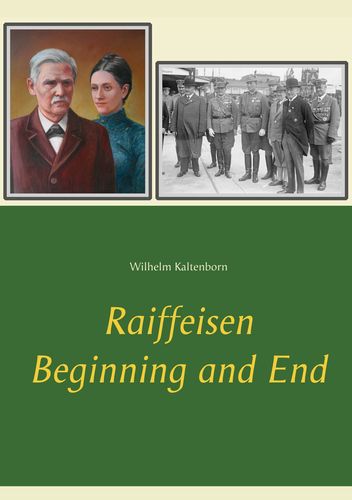 Mehr erfahren
Beschreibung
The occasion of Friedrich Wilhelm Raiffeisen,s two-hundredth birthday in March 2018 provided the inspiration for this book. In the words of the author: the hagiography expected to surround Raiffeisen this year is unlikely to reflect the real person, his work, his aims and his legacy. His anti-Semitism, his Christian fundamentalism and his paternalistic view of society have been kept quiet for decades. Kaltenborn now reveals these aspects through Raiffeisen,s statements and writings which are otherwise ignored. Yet these are an important part of his biography. Raiffeisen,s extensive anti-Semitic statements are reproduced here unabridged and in the original wording for the first time. His fight against ,social democracy, which he sees as a dangerous party of insurrection in Wilhelmine Germany is laid bare. Finally, it becomes clear how little Raiffeisen,s idea of cooperatives has to do with democratic self-help, although this principle is what first gave the cooperative concept its special character.

In short, the predominant and carefully nurtured picture of Raiffeisen undergoes a critical appraisal. All of the statements in the book are supported with substantial material which includes the comprehensive secondary literature from the period prior to 1933. Based on these sources, Kaltenborn sees the end of the Raiffeisen Organisation as occurring in 1930. Shortly before, it had suffered a crisis due to horrendous mismanagement which threatened its very existence. It was only as a result of massive state aid that disaster could be averted. In addition, it had come under the control of right-wing extremists. The Organisation took refuge under the wing of an all-encompassing Federation (its members only made up one-fifth of rural cooperatives) and had to abandon its specific traditional principles.

That which goes today under Raiffeisen,s name, according to Kaltenborn, has nothing more to do with Raiffeisen the person, his work and his aims. After reading his anti-Semitic statements, this is no cause for regret. Furthermore, the author concludes, Wilhelm Haas deserves more recognition. He created an organisation of agricultural cooperatives that was four times as large, spoke out against ,attacks on Jews, and vigorously represented the democratic nature of cooperatives.
Autor/in

Wilhelm Kaltenborn was born in 1937; employed by the Federation of Consumer Cooperatives (today: Zentralkonsum eG) since 1991, sonce 2002 Chairman of the Supervisory Board. He has also held positions on various (international) cooperative Boards; author of several publications on the idea and history of cooperatives.