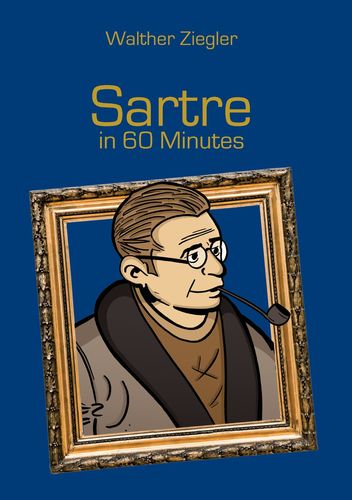 Mehr erfahren
Beschreibung
Sartre is surely one of the most important philosophers of the 20th Century. His “philosophy of existence” influenced not just academic debate but the whole of Western civilization, especially European youth. In France, from the end of WW2 on into the 1960s, a certain “youth culture” milieu composed of secondary school and university students and young artists and intellectuals proclaimed their “existential” attitude to life by wearing the black clothes and horn-rimmed glasses that Sartre was seen to wear in so many photos from the period. The motto of these “existentialists” ran: ‘do not let anyone else tell you how you are to live’. They advocated a frank and intensive style of life, both as regards friendships and love affairs and political commitments. Sartre was the great philosopher of freedom. No other philosopher has so strongly emphasized the freedom of the human will. And because Man is free he must make something out of his life and live as he believes it right to live, if necessary contrary to existing social rules and traditions. Sartre, for example, opposed many of his country’s wars, fought for a more just society, launched many petitions, and carried on a so-called “open relationship” with his lifelong companion Simone de Beauvoir. In his principal work “Being and Nothingness” Sartre also became one of the first philosophers to explore the nature of “love”. How does love actually work? What does it mean to lead a free and self-determined life? The book “Sartre in 60 Minutes” explains the most important of Sartre’s theses in a clear and comprehensible way, keeping close to Sartre’s own text and including over fifty selected passages from his work. In the chapter on “what use Sartre’s discovery is to us today” it is shown how important Sartre’s thoughts still are for our personal lives and for the society of the 21st Century. The book forms part of the popular series “Great Thinkers in 60 Minutes”.
Autor/in