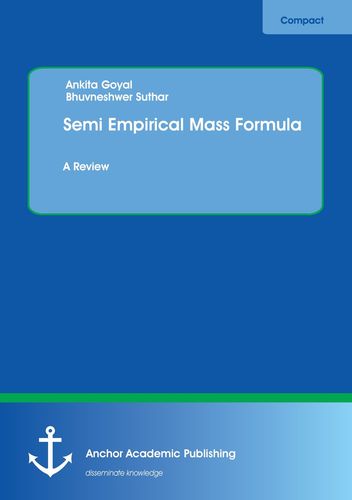 Mehr erfahren
Beschreibung
Nuclear physics is the field of physics that studies the constituents and interactions of atomic nuclei. The most commonly known applications of nuclear physics are nuclear power generation, but the research has provided application in many fields, including those in nuclear medicine and magnetic resonance imaging, nuclear weapons, ion implantation in materials engineering, and radiocarbon in geology and archaeology. The field of particle physics evolved out of nuclear physics and is typically taught in close association with nuclear physics.
A heavy nucleus can contain hundreds of nucleons which means that with some approximation it can be treated as a classical system, rather than a quantum-mechanical one. In the resulting liquid-drop model, the nucleus has an energy which arises partly from surface tension and partly from electrical repulsion of the protons. The liquid-drop model is able to reproduce many features of nuclei, including the general trend of binding energy with respect to mass number, as well as the phenomenon of nuclear fission.
Superimposed on this classical picture, however, are quantummechanical effects, which can be described using the nuclear shell model, developed in large part by Maria Goeppert-Mayer and J. Hans D. Jensen. Nuclei with certain numbers of neutrons and protons (the magic numbers 2, 8, 20, 28, 50, 82, 126, ...) are particularly stable, because their shells are filled.
Other more complicated models for the nucleus have also been proposed, such as the interacting boson model, in which pairs of neutrons and protons interact as bosons, analogously to Cooper pairs of electrons.
Autor/in

Ms Ankita Born on Aug. 1995 in Phephana (Nohar), India. She received her B.Sc. in 2013 and M.Sc. (Physics) in 2015 from M.G.S. University, Bikaner. She presented a paper in a national conference at MLV College, Bhilwara.