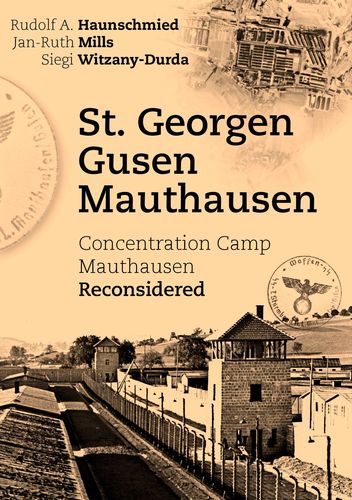 Mehr erfahren
Beschreibung
With numerous new documents that were never published before, this comprehensive study highlights the widely forgotten and neglected twin-camp character of the former Mauthausen Concentration Camp complex with key installations in St. Georgen and Gusen. It supplements the conventional narrative of the history of Concentration Camp Mauthausen with new and previously unpublished information from local sources, survivors, liberators, and archives all around the world. It focuses especially on SS infrastructure at St. Georgen and Gusen that is underrepresented in the history of Concentration Camp Mauthausen and the Holocaust in general.
The study also supplements the history of World War II and the SS´s strategic involvement in German war production during the final phase of the war with new and previously unpublished information. Thus the study gives special emphasize on joint-venture projects of the Waffen-SS with Steyr-Daimler-Puch AG and Messerschmitt GmbH Regensburg that resulted in the realization of a top secret and most modern underground plant for the serial production of Me-262 jet planes in St. Georgen that might have influenced the course of World War II.
Autor/in

Rudolf A. Haunschmied grew up and lived in the St. Georgen-Gusen-Mauthausen area. Even as a youngster he researched the "lost" history of that area. In 1986 he became a founding member of Arbeitskreis für Heimat-, Denkmal- und Geschichtspflege St. Georgen (AHDG) which gave the Gusen Memorial Committee (GMC) a home until January 2008, when he was again among the founding members of the now independent GMC. In 1989 he published the first history of Complex St. Georgen-Gusen-Mauthausen. He led excursions to the remnants of the camps as well as study circles for years and advises students and researchers. With Pierre Serge Choumoff, he organized the first international commemoration at Gusen in 1995 and founded the Gusen related website www.gusen.org in 1997. He was member of "Reforminitiative Mauthausen" at the Interior Ministery in 2000 and contributed to Audiowalk Gusen (www.audiowalk.gusen.org) in 2007. He also contributed to many documentations on radio and TV and successfully requested the opening of the former "Bergkristall" tunnels to the public and the protection of some last remnants of CC Gusen in Langenstein.

Jan-Ruth Mills earned her MFA at Columbia University in 1983. In 1997 Rudolf A. Haunschmied asked her to edit the English on the Mauthausen-Gusen Info-Pages. At that time, she began researching the Gusen Camps at the Air Force Historical Research Agency at Maxwell Air Force Base, Montgomery, Alabama. Jan-Ruth Mills made the first of many trips to the St. Georgen-Gusen-Mauthausen area in 1998. The next year, she also began yearly research trips to the National Archives and Record Administration, College Park, Maryland. In 2003 Mr. Haunschmied invited Ms. Mills to help expand his 1989 article ″Zum Gedenken 1938-1945.″ Towards this end, the Gusen Memorial Committee (GMC) supported six weeks of research at NARA II in the summer of 2005. At the request of the GMC (and with the help of Mr. Robert Wise at Pima Community College), Ms. Mills began constructing the Gusen Memorial Digital Archives. This growing archives are now permanently available through the cooperation of the East Campus of Pima Community College where Jan-Ruth Mills teaches Holocaust History. Currently Jan-Ruth Mills is writing a play about the Gusen camps.

Siegi Witzany-Durda, a native of St. Georgen/Gusen, is married with two adolescent children. She teaches German and English at a private Catholic high school. Growing up in the St. Georgen/Gusen area, she developed an interest in the history of the Gusen camps already as a teenager and felt an urge to dig deeper. She has been an active member of the Gusen Memorial Committee (GMC) since 1996. Her field of activity covers contacts with survivors and guided tours with visitors from English speaking countries as well as from Austria. Teaching the Holocaust is an essential part of her educational work.