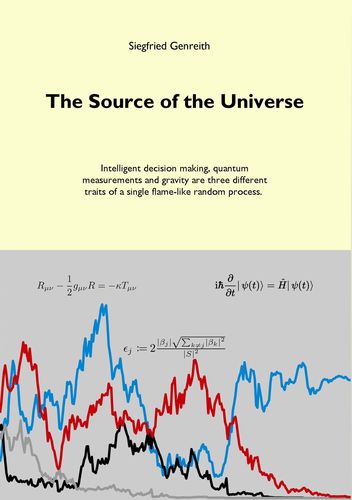 The Source of the Universe

Mehr erfahren
Beschreibung
To this day it is completely unclear how the phenomenon of consciousness can arise from the basic laws of physics. Just as mysterious is the emergence of our three-dimensional world of experience from the abstract laws of quantum mechanics. In fact, there is a little noticed random process that can resolve all these contradictions. The GenI model describes an evolutionary selection mechanism among ideas for solving a given task. Transformation behaviour and statistics meet exactly the requirements of quantum measurements, while the dynamics of decision-making satisfy Einstein's field equation.
The model suggests, that the perceivable universe is evolving according to the collapse of its quantum state rather than a smoothly evolving wave function as widely believed in modern physics. Consequently, gravitation cannot be directly derived from quantum mechanics or vice versa. Both simply describe distinct perspectives onto the previously unknown swarm-like decision process operating at the very basis of our universe.
GenI requires a fundamental change of perspective. In particular, within the model gravity is only a side effect of an evolutionary selection pressure.
Autor/in