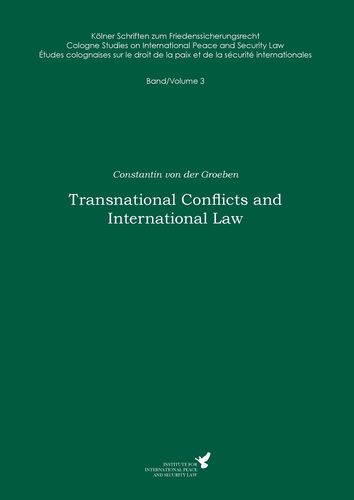 Mehr erfahren
Beschreibung
Ever since 9/11 the legal classification of transnational conflicts between states and non-state armed groups, such as Al Qaeda, has become a highly debated topic. While repeatedly referred to as the War on Terror, the legal qualification of the conflict between the US and Al Qaeda remains controversial: US military operations in Afghanistan against Al Qaeda and the use of drones against alleged terrorists in Pakistan, Yemen and other states pose the question as to whether this conflict truly qualifies as one single global war.
Similarly, transnational conflicts such as the Colombian operation against a FARC base in Ecuador, Israel’s fight against Hezbollah in Lebanon, and Turkish operations against the PKK in northern Iraq pose difficulties as they transcend individual nations˙ political systems and geographical borders. Whether the law of war (i.e. humanitarian law) is applicable to such conflicts and to what extent human rights law binds the states involved is debated.
This work aims to provide structure to the current debate and analyzes the applicability of both humanitarian law and human rights law. Furthermore, it examines and explores approaches to enhance and develop the existing legal framework, including proposed new legal regimes for transnational conflicts. The author argues against the strict separation of international humanitarian law and human rights law and instead borrows from Colombian authorities’ experience in their struggle with the FARC to develop an alternate solution, combining both legal regimes in an integrated approach.
Autor/in

Dr. iur. Constantin von der Groeben holds a PhD from the University of Cologne and an LLM in international legal studies from the New York University School of Law. He studied law at both the University of Heidelberg and the University of Cologne, during which time he was awarded a scholarship by the German National Academic Foundation (Studienstiftung des deutschen Volkes).
Dr. von der Groeben has taught courses in international humanitarian law and EU law in Bogotá, Colombia prior to pursuing his two year legal clerkship (Referendariat) in Berlin. During his time as a law clerk he worked for the district court of Charlottenburg, the office of the prosecutor in Berlin, the German Foreign Ministry, a prestigious international law firm in London, and the German Federal Parliament (Bundestag).
Dr. von der Groeben currently practices constitutional, administrative and European law in Berlin.