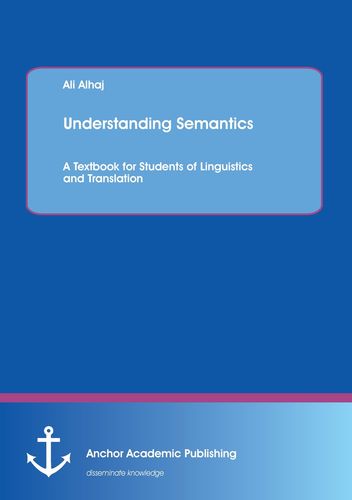 A Textbook for Students of Linguistics and Translation

Mehr erfahren
Beschreibung
Semantics is a fascinating subject, because it is “cognition turning in upon itself". This subject has also often seemed baffling with many different approaches to it. Semantics is also an appealing subject because it is about how people make sense of each other linguistically, but it can be a frustrating area of study because it requires us to make sense of people and what they have in mind.
Semantics is also a wide subject within the general study of language. An understanding of semantics is essential to the study of language acquisition and of language change. In this sense we can quote Holliday (1994: xvii) who states:
“A language…is a system for making meanings: a semantic system, with other systems for encoding the meanings it produces. The term 'semantics' does not simply refer to the meaning of words; it is the entire system of meanings of a language, expressed by grammar as well as vocabulary”.
The study of semantics includes the study of how meaning is constructed, interpreted, clarified, obscured, illustrated, simplified, negotiated, contradicted and paraphrased.
The idea of this book on semantics initially grew out for the above considerations. Moreover, it will shed new light on a subject whose problems and obscurities have seemed inexhaustible. Therefore, it became necessary, or, in other words, crucially imperative, to produce, publish and provide students and scholars with this treatise which may give an academic insight and practical approach.
Autor/in

Ali Albashir Mohammed Al-Haj was born in Sudan/ Berber 12th of June 1966. Graduated from Yemen University (1995)(Sanaa,) and University of Khartoum(2000) and obtained Bachelor of Arts(English) Postgraduate diploma(English),.M.A in English from University of Khartoum(2000) English literature. And PhD in English literature (2003). PhD in translation, Omdurman Islamic University 2014) Ali is pursuing his 3rd phd in pure linguistics. Now Ali is working as associate professor at Jazan University/ Kingdom of Saudi Arabia. Ali has published 25 books and 20 Articles in national and international journals. Ali has translated 8 books,( The Art of Leadership by Dr. Gassem Alharabi , The Recruitment in Saudi Civil Service by Dr. Hamed Alshamery Jazan University At A Glance and The Light Track and Love( Arabic Metric Poetry) by Rahuf Almaubark). He published 36 books),. Ali is a member of Editing Board of Marco Institute Journals, International Journal of Applied Linguistics and English Literature ISSN 2200-3592 (Print) , ISSN 2200-3452 (Online),scholrlink journals and he is also a supervisor of 4 PhD theses in English language.