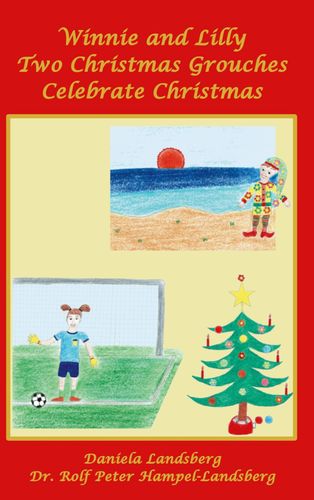 Mehr erfahren
Beschreibung
Winnie is a happy little Christmas elf who doesn't have much to do with Christmas. Instead, he loves spring, colorful flowers, and sandy beaches (especially the Maldives, which he has never seen himself). While the other elves are busy with the Christmas preparations, Winnie prefers to sing spring songs, paint pictures of the beach, and decorate his room with colorful confetti flowers and Hawaiian flower necklaces. Feeling frequently frustrated by Winnie, Santa feels it is time to give Winnie a new job. Winnie is assigned to bring Christmas closer to an orphan who doesn't like anything about Christmas. As expected, Winnie is initially indignant about playing babysitter to a little girl, but after a brief thought, he agrees.

Lilly is a small, cheeky, eight-year-old orphan, who doesn't like anything and anyone and calls herself angry. She steals, is cheeky, breaks everything, and obviously enjoys annoying others. She is a loner and does everything to ensure that it stays that way. The other children are afraid of her and try to avoid her as best they can. When Winnie shows up, Lilly quickly shows that she is not happy about it. She also tries to show him that it is better to avoid her and leave her alone. Winnie doesn't even think about it and so their story begins to unfold. After a dispute Lilly runs away from the orphanage. Winnie can follow her just in time and accompanies despite Lilly's initial resistance.

Together they experience an emotional day with many important lessons. With Winnie and Lilly, the readers meets a wide variety of people who change the way they think, act, and feel. Lilly also later learns the real reason why she is in the orphanage, and it changes her tremendously.

What the two experience and whether the original Christmas grouches will eventually become two little Christmas helpers remains to be seen....
Autor/in

Daniela Landsberg, born on February 29, 1980 in Mainz, studied Biology and German as a teacher and psychology. Her first short story came about while she was studying to be a teacher when she wanted to show her university lecturer that Christmas doesn't always mean "perfect world" and "big family". When she was writing the short story, she found that she enjoyed writing it and decided to just keep writing. When she is not writing, she likes to play with her cats, try to teach the piano to herself and get her chocolate addiction under control. As a former tournament dancer, you don't see her addiction. Daniela is an absolute night person and as an Asperger Autist she enjoys the peace and quiet when all other creatures are sleeping.