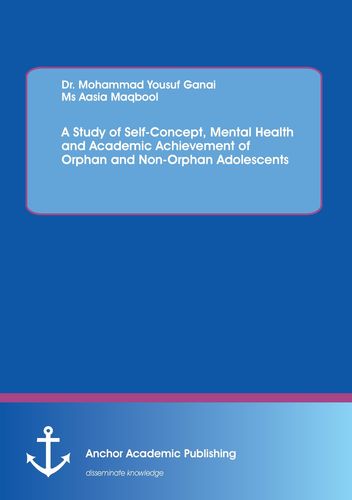 A Study of Self-Concept, Mental Health and Academic Achievement of Orphan and Non-Orphan Adolescents

Mehr erfahren
Beschreibung
All stages are important in a person’s life, whether it is infancy, childhood, adolescence or adulthood, but arguably the most sensitive stage is adolescence; which starts at around 13 and ends at approximately 19 years. It is the stage when the urge of life reaches its highest peak.
Accidents, Natural death and conflicts are creating generations of orphaned children. In addition the loss of a parent, orphaned children may face many hardships during their adolescence including decline in health, nutrition and psychological wellbeing. The number of children estimated to be orphaned due to all causes is estimated to be between 143 million and 210 million (UNICEF, 2012). Children and adolescents in particular are at increased risk for unresolved or complicated bereavement because of their development, vulnerability and emotional dependency.
The purpose of the present investigation was to examine the differences in self-concept, mental health and academic achievement of orphan and non-orphan adolescents. The study adds to the existing literature and will become a guideline for researchers, educators, administrators and counselors to guide the students in a proper way and to frame the suitable educational environment where the adolescents can be accommodated and their self-concept, mental health and academic achievement may improve.
Autor/in