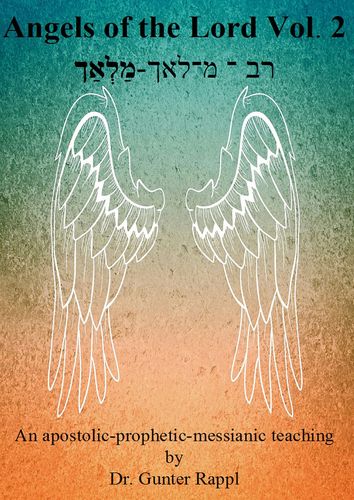 Angels of the Lord Vol. 2

Mehr erfahren
Beschreibung
Are Angels real, do they exist today, have they names like humans? In the second volume of this book series you find more answers you never dared to asked other believers. In this second book, Angels of the Lord, Apostle Dr. Gunter Rappl again takes his readers on a fascinating journey into the deeper understanding of the realm of the angels of YHWH Echad. Apostle Dr. Gunter Rappl covers fascinating topics such as detailed descriptions of the abode of angels, the dimensions of heavens, the Hebrew names of angels, special angelic forces for support of saints, supernatural transport by angels, and Abraham's bosom, to name a few. He reveals little known facts about the ministry of angels in the Courts of Heaven, angels and essential oils of the bible, angels and solfeggio worship music, and angels of the times and seasons of YHWH. He also describes for the first time the prophetic Goshen's in these last days. The revelations described in the book are again backed up by real life angelic encounters and diverse angelic visitations alone or together as ministry team in his Ekklesia Consuming Fire & GFC in Cologne, Germany. Bible-based prayers at the end of each part of the second volume of this series invite the reader to actively engage with these heavenly messengers of YHWH Echad to release protection, healings or blessings from the trading floors of heaven unto the heirs of Elohim according to the promise.
Autor/in

Dr. Apostle Gunter Rappl, born 1969, is the founding Apostle of Ekklesia Consuming Fire & GFC in Cologne, North Rhine Westfalia, Germany. Gunters heart beats that every single disciple of Yeshua HaMashiach through intimacy with YHWH Echad finds his God-given Identity and then makes his calling and election in the Edah Yeshua HaMashiachs sure.
After giving his life a second time to Yeshua at the month of Cheshvan 2001, he joined 2003 as a living stone an Apostolic-Prophetic Ekklesia in Cologne, followed by baptism in the spirit and in water around Purim 2003. Afterwards Dr. Apostle Gunter Rappl attended, beginning 2004 until 2010, in Germany and in the USA different bible-based training seminaries at apostolic and prophetic training centers with the focus on practical application of the studied material. He graduated 2006 sucessfully from a School of the Prophets (Pastors Bruno and Claudia Zimmerli, FCG Hanau, Hessen, Germany) and 2011 from a School of Apostolic Ministries (Apostle Randy Clark, Apostolic Equipping Institute, Spirit of Life Ministries, FL, USA). At the fall feasts 2011, Gunter was ordained and comissioned by Pastor Kay Tolman (Restoration Gateway Ministries, OR, USA) and her apostolic team as Apostle. At the end of 2013 Gunter completed the leadership training for Advanced Deliverance Training with the title Train the Trainers (Michael and Madelene Eayrs, Just like Him Ministries, GA, USA). At the autumn feasts of Adonai 2012 Ekklesia Consuming Fire, Cologne, Germany was born in the spirit through the Ruach HaKodesh and founded by Gunter in the natural as an international apostolic, prophetic and messianic training center (Edah) based on Acts 2 and 4. On the first apostolic and prophetic conference around the spring feasts of Adonai Nissan 2013 in Cologne the calling, vision, and mandate of the Ekklesia was judged and confirmed by the attending apostles and prophets from all over the world with whom Gunter is aligned in friendship. Since Gunter understands the safeguard of being under spiritual authority he aligned 2014 himself and the Ekklesia Consuming Fire, Cologne, with Apostle Jeff Jansen (Global Fire Ministries, TN, USA) and Ekklesia Consuming Fire became a part of the world-wide apostolic network Global Connect (Apostle Jeff Jansen). Around Shavuot 2015 Gunter was ordained and comissioned as Apostle in Global Connect by Apostle Peter Wagner, Apostle Dutch Sheets and last but not least Apostle Jeff Jansen.