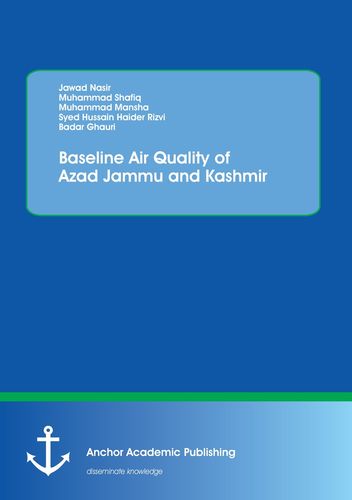 Mehr erfahren
Beschreibung
The Azad Jammu and Kashmir (AJK) environmental profiling project has been completed aiming at a healthy environment for the citizens of AJK. The Environmental Protection Agency of AJK has been providing the logistical support and moblity etc. throughout the sampling period. The present study has a very strong focus on “Indoor Air Quality Monitoring”. The monitoring has been performed at the selected locations of Muzaffarabad, Mirpur and Bhimber in residential, commercial and industrial areas for ambient air. Indoor air quality has been measured in schools, houses, hospitals and industrial units of different locations of Muzaffarabad, Mirpur and Bhimber.
Geographically, the northern part of AJK encompasses the lower part of the Himalayas. Fertile, green, mountainous valleys are characteristic of Azad Kashmir's geography, making it one of the most beautiful regions on the subcontinent. The southern parts of Azad Kashmir including Bhimber, Mirpur and Kotli districts have extremely hot weather in summers and moderate cold weather in winters. It receives rains mostly in monsoon weather. Snow fall also occurs there in December and January. This region receives rainfall in both winters and summers of the order of more than 1400 mm, with the highest average near Muzaffarabad. During summer, monsoon floods of the Jhelum and Leepa rivers are common.
Autor/in

Muhammad Shafiq completed the Ph.D. degree (2012) in Meteorology at the Institute of Meteorology of Leopold-Francis University of Innsbruck, Austria. He completed the B.Sc. and M.Sc. degrees both in Spatial Science from Department of Space Science, University of the Punjab, Pakistan in 1998 and 2000, respectively. He is employed with Pakistan Space and Upper Atmosphere Research Commission (SUPARCO) since 2003. Presently he is head of glacier hydrology and hazards group. His research interests include Climate and Cryosphere, Environmental Sciences, Geosciences, Space Meteorology and Glacial Hazards. Dr. Shafiq is a member of IEEE-Geoscience and Remote Sensing Society, Pakistan Society of Geographical Information Systems and Space Generation Advisory Council. He has been a fellow of Higher Education Commission (HEC-Pak) from 2007 to 2011.

The author holds an M.Sc. degree in Meteorology (specialization in Remote Sensing (RS) and Geographical information systems (GIS)) from the COMSATS Institute of Information Technology, Islamabad, and also a B.Sc. (Hons) degree in Space Science (specializa