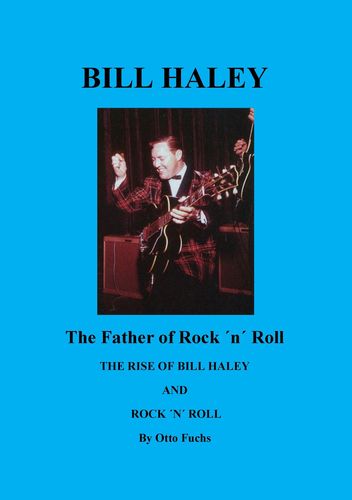 The Rise of Bill Haley

Mehr erfahren
Beschreibung
The hoopla surrounding the purported fiftieth anniversary of rock & roll didn't quite ring true. Bill Haley might have lobbied for 2001 ... fifty years after he'd covered Rocket '88'; or 2002 ... fifty years after he'd recorded Rock The Joint; or 2003 ... fifty years after he broke into the pop charts with Crazy Man Crazy, a record that fit every criterion of rock 'n' roll. But, of course, Bill Haley said not a word; he had died neglected and alone on the Mexican border in 1981, and even at the time of his death he was wondering why he'd be written out of the story." (Colin Escott, Nashville)

On April 12th 1954, Bill Haley & His Comets created the "National Anthem Of Teenagers" (Lillian Roxon) with "Rock Around The Clock", - the song which became the best-selling rock single of all time. It was not until July 6th 1954 when Elvis Presley cut his first disc - "That's Alright" - which became only a local hit in Memphis. During the same year, Bill Haley & His Comets received their first gold record for their million-seller "Shake, Rattle & Roll" and scored with "Dim Dim the Lights" in the Pop and Rhythm & Blues Charts. Bo Diddley was a year away from scoring his first hit. The same applied to Chuck Berry. Buddy Holly was sixteen and playing with school friend Bob Montgomery as a Western swing duo. Little Richard did various odd jobs, whereas Fats Domino did not change his New Orleans R&B to a more mainstream rock & roll approach until 1955. Last but not least, Jerry Lee Lewis was still performing country music in the honky tonks of Louisiana.

In 1955, Bill Haley's highly controlled, syncopated chorus of sounds, all driven by a wild, primitive, but always thundering beat, was introduced worldwide in the box office smash teenage drama "Blackboard Jungle" starring Glenn Ford and a young Sidney Poitier. This film was the ignition for "Rock Around The Clock" becoming synonymous with rock & roll. With sales now exceeding 200,000,000 copies, it was recorded by more than 500 artists in 32 different languages. It has also been featured in 40 motion pictures and, of course, as the title track to the TV series "Happy Days"
Autor/in

(...)Otto Fuchs lays out Bill´s life from the early beginnings through the great years when he was selling million of records and playing sell-out concerts around the world to those last, sad times when drink was his best friend when he tried to relive past glories. An immense amount of work has gone into these books – checking facts, finding pictures and, of course, conducting interviews.(...)