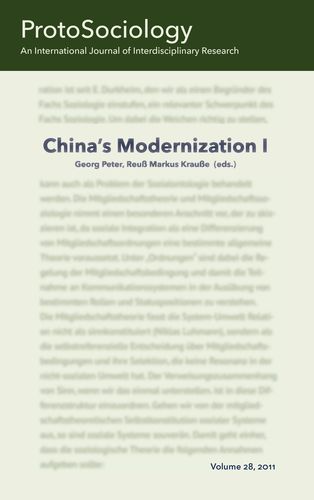 Mehr erfahren
Beschreibung
The idea of only one way leading to a modern society seems to be hardly tenable. But even if we agree to this, our theories and terms describing modernization are gained on our own Western history. So social science has to reconsider its basic terms to describe China’s modernization, and maybe even the understanding of modernization itself.
The first of two volumes on China’s modernization, collects articles by leading Chinese and Western scientists focusing on the main conflicts and differences this process involves.

In a first section – “Changing China: Dealing with Diversity” –, Björn Alperman analyses the terms “Class, Citizenship and Individualization in China’s Modernization”. Andrew Kipnis analyses the “Chinese Nation-Building as, Instead of, and Before Globalization”, while John R. Gibbins examines “Principles for Cosmopolitan Societies: Values for Cosmopolitan Places”.

“On Modernization: Law, Business, and Economy in China”, the second section, deals with “Modernizing Chinese Law: The Protection of Private Property in China” by Sanzhu Zhu, “Chinese Organizations as Groups of People – Towards a Chinese Business Administration” by Peter J. Peverelli, and “Income Gaps in Economic Development: Differences among Regions, Occupational Groups and Ethnic Groups” by Ma Rong.

The last section – “Thinking Differentiations: Chinese Origin and the Western Culture” – concentrates on the role of religion with articles by Richard Madsen (“Christianity and Hybrid Modernity in China”) and Thorsten Botz-Bornstein (“Confucianism, Puritanism, and the Transcendental: China and America”). Jeffrey N. Wasserstrom argues that Nathan Sharansky’s test for free nations should take regional variations into account in “China and the Town Square Test”. In “Metaphor, Poetry and Cultural Implicature” Ying Zhang examines if the Western understanding of metaphor can be transferred to Chinese language and culture.

The additional rubric “On Contemporary Philosophy” involves three articles about the question “Can Science Change our Notion of Existence?” by Jody Azzouni, “The Epistemological Significance of Practices” by Alan Millar, and “On Cappelen and Hawthrone’s ‘Relativism and Monadic Truth’” by J. Adam Carter.