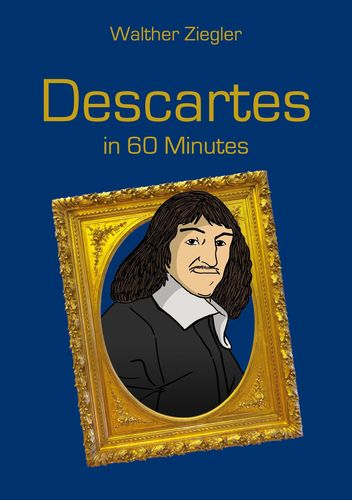 Mehr erfahren
Beschreibung
The French thinker René Descartes is one of the best-known philosophers in the world. His brief dictum "I think, therefore I am" has become part of all humanity's cultural heritage. Just as Columbus discovered an unknown continent, the so-called "New World", Descartes succeeded in opening up a new dimension of knowledge and altering our view of reality. Prior to Descartes, people in the Christian West believed, for over a thousand years, in the Bible as testimony to God's revealed truth. Then came Descartes with the radical demand that knowledge had from then on to rely on a basis of absolute certainty: "It was always my most earnest desire to learn to distinguish the true from the false". He posed the fundamental question: how does one arrive at sure and certain knowledge? On what can I really rely? On what I see and hear? On thought and logic? Or perhaps on what I have learned from my earliest childhood on? His radical answer runs: on nothing at all! We must doubt absolutely everything!
In his famous Meditations on First Philosophy Descartes describes his search for this absolutely certain knowledge. The result he arrives at: I can doubt anything and everything but in the moment of my doubting I cannot doubt that there is an "I" that thinks and doubts: "I think, therefore I am". Is thinking really the human trait that decides everything about us? Is there really nothing in the world except "thinking" within us and thoughtless, soulless bodies outside of us? Is it science's task to subjugate matter, plants and animals and even the human body itself? Descartes does more than just lay the ground for modern science. In a sense, his thought has become our destiny, both for good and for bad. The book appears as part of the well-loved series Great Thinkers in 60 Minutes which has now been translated worldwide into six languages.
Autor/in

Dr Walther Ziegler is academically trained in the fields of philosophy, history and political science. As a foreign correspondent, reporter and newsroom coordinator for the German TV station ProSieben he has produced films on every continent. His news reports have won several prizes and awards. He has also authored numerous books in the field of philosophy. His many years of experience as a journalist mean that he is able to present the complex ideas of the great philosophers in a way that is both engaging and very clear. Since 2007 he has also been active as a teacher and trainer of young TV journalists in Munich, holding the post of Academic Director at the Media Academy, a University of Applied Sciences that offers film and TV courses at its base directly on the site of the major European film production company Bavaria Film. After the huge success of the book series "Great thinkers in 60 Minutes", he works as a freelance writer and philosopher.