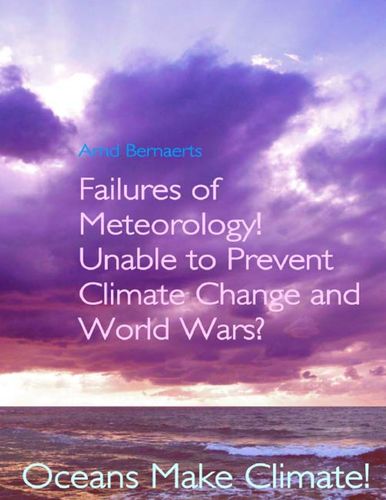 Mehr erfahren
Beschreibung
The Second World War stands for the criminal madness of German Nazi government. Less known is their responsibility for the only climatic shift from warm to cold in an otherwise constantly warming world over the last 150 years.

Not knowing the reason for the biggest climatic shift since industrialization, which started in winter 1939/40, rectifies to speak about failures of meteorology. Only four months into Second World War Northern Europe experienced the coldest winter in 100 years. The reason: plain physics! Naval war in Northern European seas released the summer heat too quickly. Polar air got free access to Europe. The same applies to the second and third war winter. Europe was back in the Little Ice Age. After Japan attacked Pearl Harbor on Dec. 7th, 1941 naval war became a global affair. In close conformity with naval war in European seas, and subsequently in the Pacific, a pronounced global cooling took place, which lasted until about the mid 1970s.

Furthermore, a thorough research of strong warming in the Northern Hemisphere from winter 1918/19 to winter 1939/40 would have revealed a convincing link to naval war in Europe from 1914 to 1918. But climatology does not care! The connection between two naval wars and two climatic changes within 25 years has not yet been investigated and explained. If they had warned governments about the threat of climate change, as their successors currently do with the "greenhouse effect", naval activities in two World Wars may have been prevented, or at least been limited.

Claims to understand climate should be regarded as a failure as long as meteorology is unable to explain the two most pronounced climatic shifts during the last century and the role two world wars had in this game. These two events would show that the oceans have a dominate role in the climate system, and man is able to change its direction by intensive activities in the marine environment. It took four months to generate the extreme regional winter 1939/40; and subsequently a few years to contribute to global cooling lasting for three.

The book should alter the debate on climate change!
Autor/in

Doctor of Law (Dr. jur.) was a seaman, ship's officer and ship master on general cargo vessels, before he became a lawyer, advocate and international consultant.