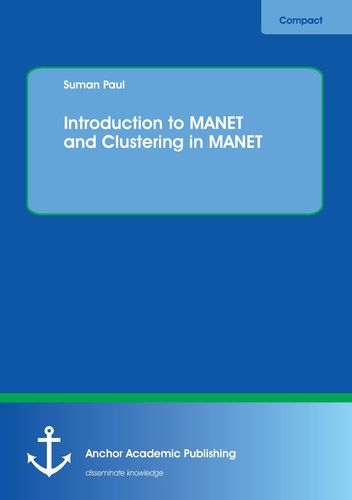 Introduction to MANET and Clustering in MANET

Mehr erfahren
Beschreibung
The emergence of powerful hand held devices like cell phones, personal digital assistants (PDA), pagers coupled with the advancement of wireless communication system have paved the way for a variety of mobile computing and wireless networking technology recently. The history of wireless networking goes to early days Defense Advanced Research Projects Agency packet radio network.
The advantage of wireless networking is its ability to support user mobility and has created a new breadth to problem solving in this domain, resulting in unpredictable resource requirement and uncertainty in network connectivity. Solutions to these problems have boosted the market for wireless services.
Wireless ad hoc network is a collection of mobile devices forming a network without any supporting infrastructure or prior organization. Nodes in the network should be able to sense and discover with nearby nodes. Due to the limited transmission range of wireless network, multiple network “hops” may be needed for one node to another (source to destination or intermediate node) across the network. There are number of characteristics in wireless ad hoc networks, such as the dynamic network topology, limited bandwidth and energy constraint in the network. Mobile ad hoc network plays an important role in different applications such as military operations to provide communication between squads, in emergency cases in out-of-the-way places, in medical control etc.
Routing protocols play a significant role in the implementation of mobile ad hoc networks (MANET). Due to the characteristics of mobility of ad hoc networks it is crucial to find a path or route from the source to the destination node and perform the communication between nodes for a long period of time.
In MANET, a number of routing protocols using a variety of routing algorithms has been proposed – for example Dynamic Source Routing (DSR), Ad hoc On demand Distance Vector Routing (AODV), Temporally Ordered Routing Algorithm (TORA), Location Aided Routing (LAR) and periodic (proactive) protocols such as Destination Sequence Distance Vector (DSDV), Distributed Bellman Ford, where member nodes exchange routing information and know a current route to each destination periodically. Also, several protocols uses both reactive and proactive mechanisms, such as Zone Resolution Protocol (ZRP) Cluster Based Routing Protocol (CBRP) etc.
Autor/in

Currently, Suman Paul is Assistant Professor at the Department of Electronics and Communication Engineering, Haldia Institute of Technology, Haldia, India. His research interest is in the field of mobile computing, networking and scheduling in embedded systems. Formerly, he worked at the Indian Institute of Management Calcutta in a Dept. of Information Technology, Govt. of India funded a project on Zigbee based Wireless Sensor Network. The author already has two books to his credit and also has publications in international journals and conferences of repute. He is a member of IAENG, Hong Kong and qualified Cisco Certified Network Associate. To date, the author has participated in various online courses of the University of Stanford, Indian Institute of Technology Kanpur, and Commonwealth of Learning.