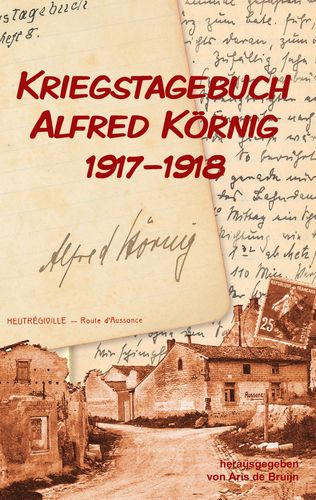 Mehr erfahren
Beschreibung
October 1917, Leutnant Alfred Körnig of Landsturm Infanterie Bataillon XIX/24 returns from leave in Germany. His unit stays in barracks (König Friedrich August Lager) in the vicinity of Aussonce (Champagne-Ardenne), France. His assignment is giving instructions in machinegun shooting and supervising drills. Later on he gets the task of constructing machinegun positions in the 3rd line trenches along the river Suippe. He describes the relations between officers, eating and drinking, playing cards, making music, singing and other pastime. It's a quiet frontsector and there are no notable fightings. The war seems far away. The last pages of his diary, end of May - beginning of April 1918, are very fragmented. It seems he gets bored. In the meantime he has had the opportunity of making a trip aboard an aeroplane of nearby Fliegerabteilung 272 and he requests for transfer to the flying corps. Unfortunately his transfer is not granted. It gives a rare insight of life between front and rear area.
In this book, scans of the original manuscript in Kurrent handwriting and transcriptions in normal print are placed side by side. A map for orientation purposes and some period postcards are added.
Autor/in

Besides this diary nothing is known about Alfred Körnig, not about the periods before, nor after this diary.