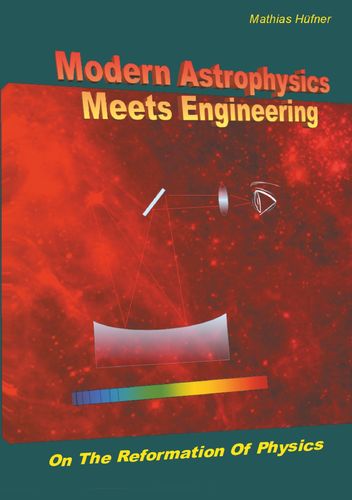 On the Reformation of Physics

Mehr erfahren
Beschreibung
Based on the philosophy of nature, the book develops a new understanding
of the physical world and shows the logical contradictions of modern physics.
The relationship between the observer and the object of observation
is discussed in a dialogue with nature.
The ideas behind the physical theories that led to the priest Lemaître's
Big Bang hypothesis and their logical errors are explained.
Although the big bang was refuted by the practical results of space travel
in the second half of the 20th century, the astrophysicists hold fast
to the mechanistic world view and stubbornly deny the electrodynamics
of the cosmos.
Has modern physics really become a maid of theology in the embrace of the
Catholic Church, as Pope Pius X. demanded in his encyclical of 1907 against
modernity?
On the basis of the physical measurement system, the basics of physics
are explained and the relationship between measurement and the object
to be measured is considered. The cause of the force between the positive
and negative charge of proton and electron is seen in an open system that
is far from the thermodynamic equilibrium. This perspective allows the
structure, maintenance and destruction of a structure to be explained using
entropy.
The structure of the cosmos can then be understood as an electrical network
based on Maxwell's equations from the atom to the largest cosmic structures. In this way, electrodynamics and optics, as well as plasma physics, become the basis of this new intergalactic world view. Such a view of the world can already explain many of the phenomena discovered from space travel, which seem extremely puzzling to the conventional mechanical-gravitational world view of astrophysicists and by means of a number of exotic constructs such as black holes and neutron stars, dark matter, antimatter and dark energy be explained by them.
The book is based on over two hundred mostly primary sources of literature.
It requires an open mind and a basic knowledge of mathematics and classical
physics, as high schools should convey.
Autor/in

The author studied physics in Leipzig from 1964 to 1970. He graduated the diplom from the Institute for Radioactive Isotopes. Then until 1978 he worked at Carl Zeiss Jena in the department Analysis measurement technology in the development of optical measuring devices and software for the evaluation of the spectral data. He then took on an assistant job at the section technology of the Friedrich Schiller University in Jena in the area of cybernetics and experimental design, studied non-numerical mathematics, computer science and other engineering sciences and received his doctorate in 1983 in this field. After the social change in the former GDR the author started after several retraining courses a freelance teaching activity that he held until 2008, where he reached the retirement pension. Only then he did start to deal with physics again and made worldwide contacts. Halton Arp and Paul Marmet especially influenced the author's thinking. As a spectroscopist, he finally found the Thunderbolt project, a project of a small, avant-garde community of scientists and engineers who are working on a new understanding of the cosmos using experimental means of plasma physics. As a voluntare he cooperates and disseminates the ideas of them.