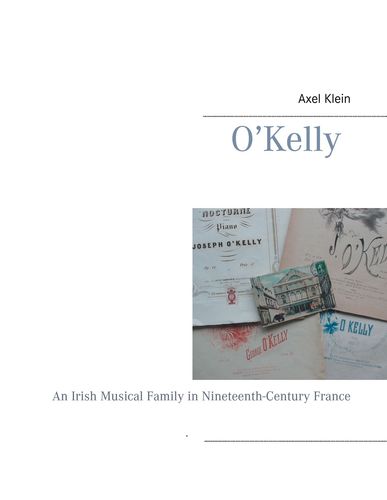 Mehr erfahren
Beschreibung
The book describes the careers and the music of four generations of Irish musicians in 19th and early 20th-century France. It is a fascinating story of hopes and disappointments, successes and failures, musical talent and tastes, as this family integrated more and more into French society.

Joseph Kelly (1804-1854), a Dublin-born piano teacher, emigrated to Boulogne-sur-Mer, where his five sons were born, three of whom became musicians. They lived in Paris since c.1835 but close links to Boulogne remained.

Joseph O'Kelly (1828-1885) became the best-known member of the family. He is the author of nine operas, four cantatas and numerous songs and piano pieces, with some excellent music to be rediscovered.

The book collects documentary evidence about all members of the family with numerous music examples and other illustrations. It is not only a study of the prototype minor composer in one of Europe's musical capitals, but also discusses issues of identity, change, aesthetics and Irishness in exile. It is a contribution to both French and Irish musical history.
Autor/in

Axel Klein studied at Hildesheim and Dublin (TCD), graduated in 1990 and received a Dr. phil. at Hildesheim in 1995. He is the author of 'Die Musik Irlands im 20. Jahrhundert' (Hildesheim, 1996) and 'Irish Classical Recordings. A Discography of Irish Art Music' (Westport, CT, 2001). He also co-edited 'Irish Music in the Twentieth Century' (= Irish Musical Studies vol. 7; Dublin, 2003) and 'The Life and Music of Brian Boydell' (Dublin, 2004). He has been the subject advisor on Ireland for the German encyclopedia 'Die Musik in Geschichte und Gegenwart' (MGG), 1996-2008, and an Advisory Editor for the 'Encyclopaedia of Music in Ireland' (Dublin, 2013). For further publications and other information see www.axelklein.de.

Musicologists working in Paris archives always raise their eyebrows when stumbling across the exotic name O'Kelly, as inevitably they do. Here Axel Klein gets the family story properly told. (...)