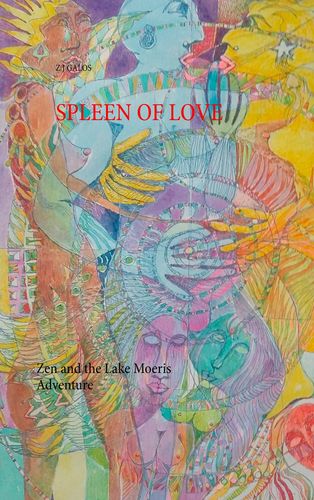 Zen and the Lake Moeris Adventure

Mehr erfahren
Beschreibung
Zen, who had turned to novel writing, meets a beautiful, dusky woman at the Writers Write club. As friends, they both conduct their research at the Sandton library in Johannesburg. During their stay, a freak earthquake erupts suddenly and Zen protects Sola from falling debris. Both had lost their spouses. Sola's husband escaped to India with their two children and zen's spouse had left for her family in Europe. Kurt, Zen's friend welcomes him and Sola at his home in Camps Bay, Cape province, where it still seems to be safe from an erupting pandemic disease, called 'Green Death'. Zen, tempted by Kurt's wife, Trudy, seduces her. She is biased toward dusky Sola, from Indian origin. Chris, her daughter befriends Sola, while Kurt's favorite daughter Heidi, fancies Zen. Shortly thereafter, as Zen had convinced Kurt, the skipper, that they should leave the country by boat, as the epidemic spreads countrywide and affects mostly children. Sailing Kurt's boat, Zen has the full attention of Trudy steering it, while Kurt recovers from an accident. At a farewell party in Gibraltar, having mastered a storm at sea, Sla and Zen participate in their host's orgy. Sola leaves the next morning and asks Zen to help her with finding her children. Zed's friend Mohamed, agrees to welcome them in Egypt, which is still free of the 'Green Death' disease. Mohamed encourages Zen and Sola to become Egyptologists and help him with his sightseeing tours along the Nile. At a visit to the Hathor temple in Dendera, terrorists capture Mohamed and Sola. Sahib and Zen prepare with a specialist troupe to rescue them from the camp in the desert. George, Sola's estranged husband meets her at the camp and coerces a surprised Sola to have sex with him. Sola demands in exchange more freedom for her and Mohamed, plus the necessary medication to survive. Mohamed becomes Sola's spiritual healer and falls in love with her. Operation Horus launches a surprise attack and Zen frees Sola and Mohamed, but shielding them is badly wounded. At the last minute, Sahib pulls Zen into the military rescue helicopter. Will Zen survive? What will happen to Sola's children?
Autor/in

Born in eastern Austria, he witnessed as a young man the horrors of a nation's suppression, erupting in the Hungarian Revolution of 1956. He finished his education in art and architecture in Vienna, married and sailed for the Cape of Africa, an adventure that followed his childhood dreams. He had drawn African animals for his art classes, but the time had come to see them in their natural habitat. Meeting a varied facet of people and cultures, working as a draughtsman in an engineering office, as an architect for a cultural center, as a coordinator of craftsmen and professionals, he made good use of his language skills traveling throughout Southern Africa.
During a trip to Lesotho, a native artist showed him rock paintings with their stark palimpsest outlines and typified movements of animals and humans. It made a lasting impression on him and influenced his artistic work.
His vast collection of drawings and slides had been lost during a change of domiciles, but further studies about the art of the San- people reawakened his dormant artistic longing to express his own art, filling his sketchbooks with drawings and notepads with poetry and prose.
While revisiting the capitals of Europe, he sensed the bond of art being borderless and free, reaching across continents into the world.
During a visit to Greece, he was accepted into a circle of artists and poets, who encouraged him to continue his art and poetry opening his mind for contemporary Greek poetry.
Back in South Africa, he joined a writing and poetry workshop that opened the floodgates of his creativity. He now lives and works in Klosterneuburg-Weidling.