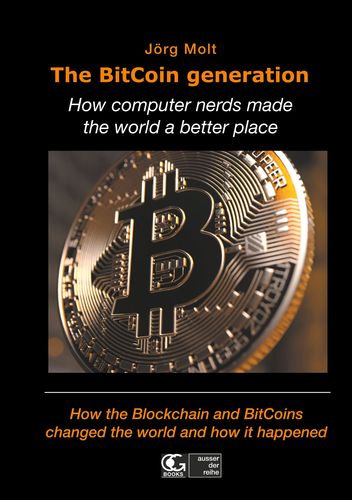 How computer nerds made the world a better place

Mehr erfahren
Beschreibung
Guys, you have been sleeping! In 2008, something began to creep in, like a newborn virus waiting to become Ebola and trigger a pandemic. A virus that meanwhile had been implanted into over
1 million heads and users voluntarily installed this virus on their computers.The BitCoin came to stay is a popular quote that is used more and more often today. Others say, BitCoin will eventually be replaced by another digital currency, because it is only the beginning, and as with many beginnings,
the true potential of a digital currency will come later. The wholeidea has only one catch.You cannot just see the BitCoin as a means of payment or a value transfer system. You cannot disassociate the BitCoin from the BitCoin Blockchain. Due to the importance of the BitCoin for freedom, selfdetermination and a symbol of peace, to escape surveillance and to free oneself from the countries tampering, the question arises, how anonymous am I in this BitCoin world? Edward Snowden has shown us, we are
no longer free, but totally supervised.
Autor/in

Jörg Molt was born in Germany in 1972 and lives in Bavaria. At the age of 9, he had his first computer, a Commodore VC 20 and later on the C64, C128, Amiga 500, Amiga 1200 and Amiga 2000. Early on, he came into the 'scene' circles, learnt programming and hacking program codes.
Jörg Molt attended several computer conferences around the globe and was one of the first to use the early Internet. In 1993 he became aware of the so-called Cypher-punkära by old friends, with whom he grew up. One of the most flamboyant people of his time was certainly Kim Schmitz alias Dr. med. Kimble or Dr. Dotcom, with whom he had spent some time in his hometown youth centre, before Kim disappeared. In the mid-1990s, Jörg Molt then engaged himself with digital money systems and pursued this until the start of BitCoin. Therefore, he is one of the few people who have owned BitCoins from the very beginning.
Professionally and privately, Jörg Molt has continued his education in the IT sector and finally worked in various IT companies. Today he is in demand as a speaker at specialist conferences on BitCoin and BitCoin Blockchain, focusing on future development, security and decentralization.
In 2017, he was named in the Top 100 Trainer Excellence, by Speaker Excellence. Jörg Molt is one of the few experts for Blockchain and Crypto currencies: As a trainer, expert speaker and consultant, he is one of the most renowned specialists in Europe. Throughout many industries, he advises well-known companies and institutions worldwide on the implementation of digitization processes. As a solo miner and a member of the association at Antmine, he has helped to create significant structures. He built up capital and fixed assets in BitCoin from the start. Through the general development of Smart Contracts, based on the decentralised Blockchain, he founded an affiliate to mediate between users and manufacturers. Together with other experts, this resulted in the "Satoshi Competence School". In his easily understandable and humorous way, Jörg Molt enthuses his participants, and uses practical examples to show how the evolutionary technology is easy to apply.