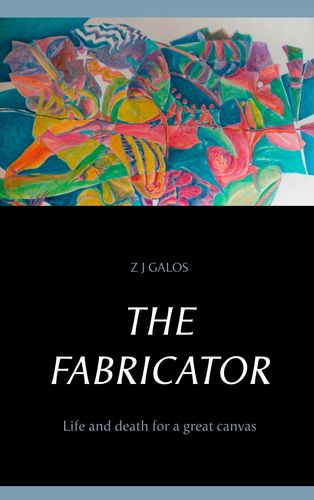 Life and death for a great canvas

Mehr erfahren
Beschreibung
Pablo, an artist on the move, had left the South of Africa, working successfully as an architect, as most of his clients settled in other countries. Via Dubai, he arrived in Greece, where he cannot find work in his profession, but he would enjoy with his friends the freedom of creating art and poetry. His art exhibitions were well attended, but he could only sell a few paintings. As his funds diminished, he met Alica in the nick of time, an architect in Bratislava, who invited him. Enticed by a new adventure, he leaves Athens and Alica offers him lodgings at her studio. Exploring the city center, Pablo meets Tommy by an incident, recovering Tommy's hat blown off by a gust of wind. Invited to Tommy's Art Shop Bratislava, Pablo is hired to copy popular art pieces, which Lisa, Tommy's partner sells successfully in China. When Lisa intends to open Art Shop Paris, Pablo produces a four-panel work which depicts five different nude women, as a homage to Picasso. The work causes great interest, followed by chaos, as it is stolen before the official opening of Art Shop Paris. Pablo's task to recover the painting, with his assistant and a local investigator, is initially successful due to a female staff member. However, Pablo and Lisa fear that the appearance of a dusky man is related to the art theft. Will the grand opening be safe and memorable?
Autor/in

Born eastern Austria, close to the Hungarian border, he witnessed as a young man the horrors of a nation's suppression, erupting in the Hungarian Revolution of 1956. He finished his education in art and architecture in Vienna, married and sailed for the Cape of Africa, an adventure that followed his childhood dreams. He had drawn African animals for his art classes, but the time had come to see them in their natural habitat.
Meeting a varied facet of people and cultures, working as a draftsman in an engineering office, as an architect for a cultural center, as a coordinator of craftsmen and professional people, he made good use of his language skills traveling throughout Southern Africa. During a trip to Lesotho, a native artist showed him rock paintings with their palimpsest outlines and typified movements of animals and humans. It made a lasting impression on him and influenced his artistic work.
His vast collection of drawings and slides had been lost during a change of domiciles, but further studies about the art of the San- people reawakened his dormant artistic longing for expression of his art, filling sketchbooks with drawings and notepads with poetry and prose. While visiting the capitals of Europe, he sensed that the bond of art being borderless and free, reaching out across continents into the world.
During a visit to Greece, he was accepted into a circle of artists and poets. In South Africa, he joined writing and poetry workshops that led to open the floodgates of his creativity.
He decided to travel through Greece and visit its sites of antiquity, read up on Classical mythology and he enjoyed translations of Greek poetry and prose. Settled in 2013 in Klosterneuburg-Weidling, a historical and romantic village, part of the culturally important city of Klosterneuburg, where he now lives and works. Poet Nikolaus Lenau is buried here and his poetry will always remain an inspiration.