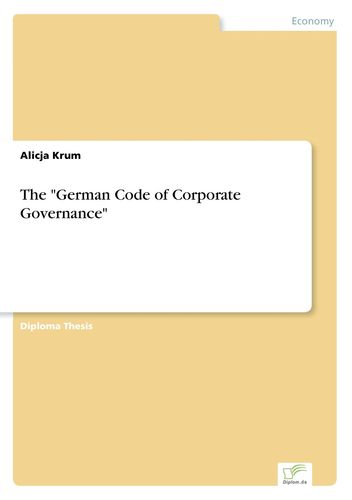 The "German Code of Corporate Governance"

Mehr erfahren
Beschreibung
Inhaltsangabe:Abstract:
The management and supervision of corporations, known as corporate governance in English and, frequently, in German-speaking countries as well, has been a topic of discussion since beginning of the 90's in the USA. After arriving in Great Britain the discussion subsequently spread to Continental Europe. In Germany, the effective supervision of corporations became a central topic of debate after several well-known corporations came under scrutiny for mismanagement. In such cases the corporations supervisory boards were criticised in particular, as their supervision of management was considered insufficient and ineffective.
The relation between management and owners of a corporation represents the basic problem of the corporate governance discussion. The management of a corporation must take the interests of large-scale investors and, accordingly, the interests of smaller investors into consideration. Against this background, the influence of the stakeholders is repressed. The shareholder value system, thus, becomes increasingly important.
Globalisation and the resulting integration of capital markets has caused more and more large institutional investors -especially, those from Anglo-Saxon countries- to put their financial assets to the test in order to check the efficiency of management and supervision.
In Germany, in particular, effective regulations on corporate governance have been missing until now. In most of the other countries with a free market economy, a code of conduct with generally accepted principles is already in existence. These principles enable investors to check and to judge systematically a corporation in regard to its corporate governance.
Corporations with transparent supervisory systems obtain clearly better stock quotations as corporations without those systems. Numerous surveys have found that institutional investors are willing to pay up to a 20 percent premium for shares of corporations with good corporate governance. Such investors maintain that transparency and efficient supervision reduce the risk of mismanagement.
Due to both the internal pressure of mismanagement and the external change caused by the globalisation of capital markets, the corporate governance discussion in Germany has resulted in much effort to create a system of regulations to make Germany more attractive to international investors. In addition to this, the regulations are intended to stem the criticism of numerous […]
Autor/in