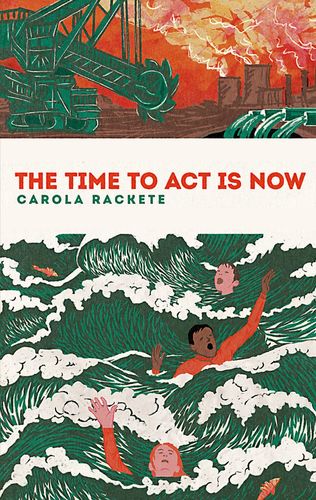 The time to act is now

Mehr erfahren
Beschreibung
»We are at a turning point in human history. To stop climate breakdown and extinction,
environmental movements need to be actively anti-racist and join struggles for social justice.«
Carola Rackete

In 2019, Carola Rackete became publicly known for docking the sea rescue vessel »Sea-Watch 3« in Italy and thereby challenging a national decree that contradicted international obligations
to engage in sea rescue. Due to this act of civil disobedience and her public confrontation of the Italian far right and the structural racism of the EU's Fortress Europe policy, Carola became a
powerful symbol for people seeking to take practical action for a world based on justice and equality.
Carola has worked in the polar regions since 2011 and holds a degree in natural resources management. Consequently, her book shows how the ecological crises we are facing today are
rooted in social and political power structures. The book details moments of the rescue mission but also connects the dots to forced migration and the urgency of our environmental predicament.
Overall, it is a call to engage and act to become part of initiatives and movements struggling for social and environmental justice.This version of the book includes a new afterword focused on centring justice and human rights in nature and biodiversity conservation - a topic often overlooked by climate activists in the Global North.
The authors will donate the revenue from this book to the association borderline-europe - Menschenrechte ohne Grenzen e.V. in order to launch a new criminalization fund. The money from this fund will be used to support refugees who are criminalized in the EU for fleeing to Europe.

This edition is supported by the Rosa-Luxemburg-Stiftung with funds from the German Federal Foreign Office.
Autor/in

Carola Rackete, born in 1988, studied nautical sciences in
Elsfleth (Germany) and conservation management in Orm-
skirk (UK). She visited Antarctica in 8 of the last 10 years
while working on polar research vessels for the German polar research institute AWI , the British Antarctic Survey and
for Greenpeace. Between 2016 and 2019, she volunteered
for sea rescue NGOs in the Central Mediterranean and was
arrested as captain of the »Sea-Watch 3« vessel in 2019. Her
current activism is focused on justice in nature conservation and climate movements.

Anne Weiss, born in 1974, is an author and environmen-
tal activist. One of her latest books published in German
is »Generation Weltuntergang. Eine Geschichte des Kli-
mawandels« (Generation World's End. A history of climate
change).