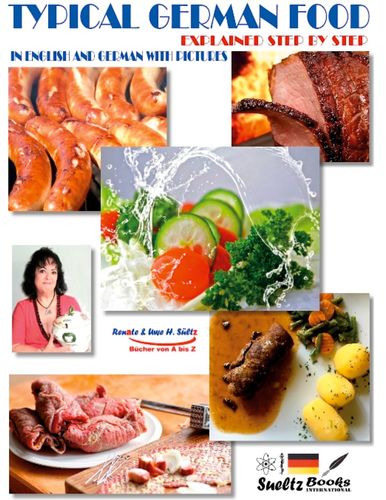 Explained step by step in German and English with pictures

Mehr erfahren
Beschreibung
Dear readers and cooks,
With this cookbook I would like to introduce you to the typical dishes from Germany. We have many friends in the USA who cook German cuisine privately or also run restaurants. Now we are in the middle of the CORONA time. Restaurants are closed. Contacts between people are limited. Internet trade, including the book market, is booming. We can have food delivered to us. Many families now cook for themselves. And anyone who loves or wants to get to know German cuisine has a look at cookbooks or the Internet. With this cookbook I would like to explain some typical dishes step by step. The book in German has been a great success. Now I want to publish it in English. As a translator, I chose GOOGLE. In the event of an editing, the book would not be ready until next year. In addition, the cookbook would become more expensive. We will pass these saved costs on to you. However, it may happen that GOOGLE does not translate everything correctly. So a bratwurst remains a "bratwurst". It's a fried sausage, a "roasted sausage". For those who want it in German, the German translation is also printed. I hope you excuse me, after all, it depends on the typical taste. And of course that you can cook it. Have fun cooking, everyone stays healthy!
Autor/in